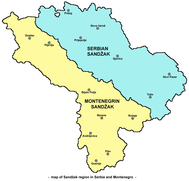 Sandžak (Cyrillic: Санџак pronounced [sǎndʒak], Turkish: Sancak)[1] is a historical region, now divided by the border between Serbia and Montenegro. Тhe name Sandžak derives from the Sanjak of Novi Pazar, a former Ottoman administrative district.[2] Between 1878 and 1909 the region was placed under Austro-Hungarian occupation, following which it was ceded back to the Ottoman Empire. In 1912 the region was divided between the kingdoms of Montenegro and Serbia.[3] Montenegrins and Serbs refer to the region by its medieval name Raška, hence the name Sandžak-Raška. The most populous city in the region is Novi Pazar, followed by Pljevlja.

The first known inhabitants of the region now known as Sandžak were Illyrians. In the 1st century, the region was conquered by the Romans, while in the 6th and 7th centuries, it was settled by the Slavic tribes. The Illyrians mixed with the Slavic population, as well as in the whole territory of former Yugoslavia.

In the Middle Ages the region was part of the original Serb state of Raška. The capital of Raška was the city of Ras, located near present day Novi Pazar. The region was later part of the subsequent Serb states, before being adjoined to the Bosnian Kingdom during the 14th century until its conquer by the Ottoman Empire in the 15th century.

During the centuries of Ottoman rule the Sanjak of Novi Pazar was a part of the Province of Bosnia before coming under the Kosovo Province in 1878. The 1878 Congress of Berlin allowed Austro-Hungarian military garrisons to be positioned in Sandžak where they remained until 1909

Serbia and Montenegro[edit]In October 1912, Sandžak was recaptured by Serbian and Montenegrin troops in the First Balkan War, and its territory was divided between the Kingdoms of Serbia and Montenegro. Many Bosniak and Albanian inhabitants of Sandžak emigrated to Turkey as muhajirs. There are numerous colonies of Sandžak Bosniaks in Turkey, in and around Edirne, Istanbul, Adapazarı,(İzmir)(Çeşme peninsula) Bursa, and Samsun among others[citation needed]. During World War I, Sandžak was under occupation of Austria-Hungary from 1915 to 1918.

Yugoslavia[edit]In 1918, Serbia and Montenegro united before creating the Kingdom of Serbs, Croats and Slovenes which became the Kingdom of Yugoslavia in 1929. Between 1929 and 1941, Sandžak was part of a newly created province, theZeta Banovina, with its headquarters in Cetinje.

At the beginning of the Second World War the territory of Sandžak was captured by Ustaše. It was based on the Croatian territorial pretensions toward the whole territory of Sandžak (Croatian nationalists considered Muslims as ethnic Croats) and also on appeals of groups of local Muslim leaders sent to Ante Pavelić to annex Sandžak to Bosnia and Herzegovina. Between April and August 1941 Ustaše established detachments of the Moslem militia all over Sandžak, with particularly strong detachments in Brodarevo, Komaran, Hisardžik and parts of Novi Pazar, Tutin and Sjenica. This militia participated in the suppression of the Uprising in Montenegro. At the beginning of September 1941 Ustaše left Sandžak and almost all of its territory came under Italian control, together with its militia. The city of Novi Pazar was included into Serbia, while Plav and Rožaje were included into Italian ruled Albania, and under German occupation from 1943. Following his appointment to the post of Höhere SS-und Polizeiführer Sandschak (Higher SS and Police Leader Sanjak) in September 1943, Karl von Krempler came to be known as the "Sanjak Prince" after his relatively successful formation of the SS Polizei-Selbstschutz-Regiment Sandschak commanded by Sulejman Pačariz.[4] At the end of the war, Sandžak was divided between Serbia and Montenegro, according to the initial division agreement between the two states from 1913.

The Yugoslav wars of the 1990s left Sandžak largely unscathed, although the wars in Bosnia and Kosovo led to ethnic tensions and (in the latter case) bombing by NATO forces. According to Sandžak Bosniak political parties, some 60,000-80,000 Bosniaks emigrated from the region during this period. A number of group killings of Bosniaks occurred 1992–1995, with the most notable ones being the cases of Sjeverin (near Priboj), Bukovica (near Pljevlja), and Štrpci (near Prijepolje).