Pyrrhus of Epirus, Pyrrhus the Eagle 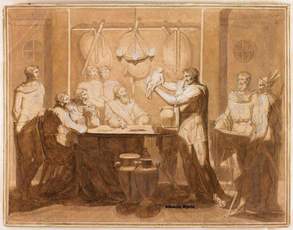 Pyrrhus was the son of Aeacides and Phthia, a Thessalian woman, and a second cousin of Alexander the Great (via Alexander's mother, Olympias). He had two sisters: Deidamia and Troias. In 317 BC, when Pyrrhus was only two, his father was dethroned. Pyrrhus' family took refuge with Glaukias of the Taulantians, one of the largest Illyrian tribes.[4] Pyrrhus was raised by Beroea, Glaukias's wife and a Molossian of the Aeacidae dynasty.[2][7]

Glaukias restored Pyrrhus to the throne in 306 BC until the latter was banished again, four years later, by his enemy, Cassander. Thus, he went on to serve as an officer, in the wars of the Diadochi, under his brother-in-law Demetrius Poliorcetes who married Deidamia. In 298 BC, Pyrrhus was taken hostage to Alexandria, under the terms of a peace treaty made between Demetrius and Ptolemy I Soter. There, he married Ptolemy I's stepdaughter Antigone (a daughter of Berenice I of Egypt from her first husband Philip, Ptolemy I's wife and a Macedonian noble) and restored his kingdom in Epirus in 297 BC with financial and military aid from Ptolemy I. Pyrrhus had his co-ruler Neoptolemus II of Epirus murdered. In 295 BC, Pyrrhus transferred the capital of his kingdom to Ambrakia (modern Arta). Next, he went to war against his former ally and brother-in-law Demetrius and in 292 BC he invaded Thessaly while Demetrius was besieging Thebes but was repulsed. By 286 BC, Pyrrhus had taken control over the kingdom of Macedon, but was driven out of Macedon by Lysimachus in 284 BC.

The Greek city of Tarentum, in southern Italy, fell out with Rome due to a violation of an old treaty that specified Rome was not to send warships into the Tarentine Gulf.[8] In 282 BC, the Romans installed garrisons in the Greek cities of Thurii (on the western end of the Tarentine Gulf), Locri, and Rhegium, and Rome sent warships to Thurii. Although this was designed as a measure against the Italian peoples of Lucania, the Tarentines grew nervous and attacked the Romans in Thurii, driving the Roman garrison from the city and sinking several Roman warships. Tarentum was now faced with a Roman attack and certain defeat, unless they could enlist the aid of greater powers. Rome had already made itself into a major power, and was poised to subdue all the Greek cities in Magna Graecia. The Tarentines asked Pyrrhus to lead their war against the Romans.[4] Pyrrhus was encouraged to aid the Tarentines by the oracle of Delphi. His goals were not, however, selfless. He recognized the possibility of carving out an empire for himself in Italy. He made an alliance with Ptolemy Ceraunus, King of Macedon and his most powerful neighbor, and arrived in Italy in 280 BC.

Pyrrhus entered Italy with an army consisting of 3,000 cavalry, 2,000 archers, 500 slingers, 20,000 infantry and 20 war elephants in a bid to subdue the Romans.[4] The elephants had been loaned to him by Ptolemy II, who had also promised 9,000 soldiers and a further 50 elephants to defend Epirus while Pyrrhus and his army were away.


Tribes of Epirus in antiquity.

Pyrrhus and his elephants.
Due to his superior cavalry and his elephants, he defeated the Romans, led by Consul Publius Valerius Laevinus, in the Battle of Heraclea in 280 BC.[9] There are conflicting sources about casualties. Hieronymus of Cardia reports the Romans lost about 7,000 while Pyrrhus lost 3,000 soldiers, including many of his best. Dionysius gives a bloodier view of 15,000 Roman dead and 13,000 Epirot. Several tribes, including the Lucani, Bruttii, Messapians, and the Greek cities of Croton and Locri, joined Pyrrhus. He then offered the Romans a peace treaty which was eventually rejected. Pyrrhus spent the winter in Campania.[4]

When Pyrrhus invaded Apulia (279 BC), the two armies met in the Battle of Asculum where Pyrrhus won a very costly victory. The consul Publius Decius Mus was the Roman commander, and while his able force was ultimately defeated, they managed to break the back of Pyrrhus' Epirot army, which guaranteed the security of the city itself. In the end, the Romans had lost 6,000 men and Pyrrhus 3,500 including many officers.[4] Pyrrhus later famously commented on his victory at Asculum, stating, "If we are victorious in one more battle with the Romans, we shall be utterly ruined".[10] It is from reports of this semi-legendary event that the term Pyrrhic victory originates.

In 278 BC, Pyrrhus received two offers simultaneously. The Epiriote cities in Sicily asked him to come and drive out Carthage, which along with Rome was one of the two great powers of the Western Mediterranean. At the same time, the Macedonians, whose King Ptolemy Keraunos had been killed by invading Gauls, asked Pyrrhus to ascend the throne of Macedon. Pyrrhus decided that Sicily offered him a greater opportunity, and transferred his army there.[4]

Soon after landing in Sicily, he lifted the Carthaginian siege of Syracuse in the same year. Pyrrhus was proclaimed king of Sicily. He was already making plans for his son Helenus to inherit the kingdom of Sicily and his other son Alexander to be given Italy. In 277 BC, Pyrrhus captured Eryx, the strongest Carthaginian fortress in Sicily. This prompted the rest of the Carthaginian-controlled cities to defect to Pyrrhus.

In 276 BC, Pyrrhus negotiated with the Carthaginians. Although they were inclined to come to terms with Pyrrhus, supply him money and send him ships once friendly relations were established, he demanded that Carthage abandon all of Sicily and make the Libyan Sea a boundary between themselves and the Greeks. The Greek cities of Sicily opposed making peace with Carthage because the Carthaginians still controlled the powerful fortress of Lilybaeum, on the western end of the island. Pyrrhus eventually gave in to their proposals and broke off the peace negotiations. Pyrrhus' army then began besieging Lilybaeum. For two months he launched unsuccessful assaults on the city, until finally he realized he could not mount an effective siege without blockading it from the sea as well. Pyrrhus then requested manpower and money from the Sicilians in order to construct a powerful fleet. When the Sicilians became unhappy about these contributions he had to resort to compulsory contributions and force to keep them in line. These measures culminated in him proclaiming a military dictatorship of Sicily and installing military garrisons in Sicilian cities.[11]

These actions were deeply unpopular and soon Sicilian opinion became inflamed against him. Pyrrhus had so alienated the Sicilian Greeks that they were willing to make common cause with the Carthaginians. The Carthaginians took heart from this and sent another army against him. This army was promptly defeated. In spite of this victory Sicily continued to grow increasingly hostile to Pyrrhus, who began to consider abandoning Sicily. At this point, Samnite and Tarentine envoys reached Pyrrhus and informed him that of all the Greek cities in Italy only Tarentum had not been conquered by Rome. Pyrrhus made his decision and departed from Sicily. As his ship left the island, he turned and, foreshadowing the Punic Wars, said to his companions: "What a wrestling ground we are leaving, my friends, for the Carthaginians and the Romans."[12][13]

While Pyrrhus had been campaigning against the Carthaginians, the Romans rebuilt their army by calling up thousands of fresh recruits. When Pyrrhus returned from Sicily, he found himself vastly outnumbered against a superior Roman army. After the inconclusive Battle of Beneventum in 275 BC, Pyrrhus decided to end his campaign in Italy and return to Epirus which resulted in the loss of essentially all the gains he had made in Italy, however the city of Tarentum remained under the dominion of the Epirotes.

Though his western campaign had taken a heavy toll on his army as well as his treasury, Pyrrhus went to war yet again. Attacking King Antigonus II Gonatas (r. 277–239 BC), he won an easy victory at the Battle of the Aous and seized the Macedonian throne.

In 272 BC, Cleonymus, a Spartan of royal blood who was hated among fellow Spartans, asked Pyrrhus to attack Sparta and place him in power. Pyrrhus agreed to the plan, intending to win control of the Peloponnese for himself, but unexpectedly strong resistance thwarted his assault on Sparta. On the retreat he lost his firstborn son Ptolemy, who had been in command of the rearguard.

Pyrrhus had little time to mourn, as he was immediately offered an opportunity to intervene in a civic dispute in Argos. Since Antigonus Gonatas was approaching too, he hastened to enter the city with his army by stealth, only to find the place crowded with hostile troops. During the confused battle in the narrow city streets, Pyrrhus was trapped. While fighting an Argive soldier, the soldier's old mother who was watching from a rooftop threw a tile which knocked him from his horse and broke part of his spine, paralyzing him. Whether he was alive or not after the blow is dubious, but his death was assured when a Macedonian soldier named Zopyrus, though frightened by the look on the face of the unconscious king, hesitantly and ineptly beheaded his motionless body.

Antigonus had him cremated with all honours and sent his surviving son Helenus back to Epirus. That same year, upon hearing the news of Pyrrhus's death, the Tarentinians surrendered to Rome.

While he was a mercurial and often restless leader, and not always a wise king, he was considered one of the greatest military commanders of his time. In his Life of Pyrrhus, Plutarch records that Hannibal ranked him as the greatest commander the world had ever seen,[2] though in the life of Titus Quinctius Flamininus, Plutarch writes that Hannibal placed him second after Alexander the Great. This latter account is also given by Appian.[14]

Pyrrhus was also known to be very benevolent. As a general, Pyrrhus's greatest political weaknesses were his failures to maintain focus and to maintain a strong treasury at home (many of his soldiers were costly mercenaries).

His name is famous for the term "Pyrrhic victory" which refers to an exchange at the Battle of Asculum. In response to congratulations for winning a costly victory over the Romans, he is reported to have said: "If we are victorious in one more battle with the Romans, we shall be utterly ruined".[10]

Pyrrhus and his campaign in Italy was effectively the only chance for Greece to check the advance of Rome towards domination of the Mediterranean world. Rather than banding together, the various Hellenistic powers continued to quarrel among themselves, sapping the financial and military strength of Greece and to a lesser extent, Macedon and the greater Hellenistic world. By 197 BC, Macedonia and many southern Greek city-states became Roman client states; in 188 BC, the Seleucid Empire was forced to cede most of Asia Minor to Rome's ally Pergamon (Pergamum). Rome inherited that state, and most of Asia Minor in 133 BC. Total Roman domination over Greece proper was marked by the destruction of Corinth in 146 BC; Greece would then form an integral part of the Roman world leading into the Byzantine period.

Pyrrhus wrote memoirs and several books on the art of war. These have since been lost, although, according to Plutarch, Hannibal was influenced by them,[2] and they received praise from Cicero.[15]

Pyrrhus was married five times: his first wife Antigone bore him a daughter called Olympias and a son named Ptolemy in honour of her stepfather. She died in 295 BC, possibly in childbirth, since that was the same year her son was born.[16] His second wife was Lanassa, daughter of King Agathocles of Syracuse (r. 317–289 BC), whom he married in about 295 BC and the couple had two sons Alexander[16] and Helenus; Lanassa left Pyrrhus. His third wife was the daughter of Audoleon, King of Paeonia; his fourth wife was the Illyrian princess Bircenna, who was the daughter of King Bardylis II (r. c. 295–290 BC); and his fifth wife was the daughter of Ptolemy Keraunos, whom he married in 281/280 BC. Portraits of Pyrrhus as came down to us do not necessarily reflect his likeness.[17]