Myzeqe or Myzeqeja, or Musachia is a region in the south-western part of central Albania,[1] sometimes referred to as being between the Shkumbin and Seman rivers,[2] and sometimes extending south to the Vjose river north of Vlorë.[3] Administratively, the region falls mainly within Lushnjë and Fier District. Other terms like Myzeqeja e Vogël (Small Myzeqe), Myzeqeja e Beratit (Berat's Myzeqe), or Myzeqeja e Vlorës (Vlora's Myzeqe) are used to point respectively to the Fier part of the region, and to tiny parts that fall into the adjacent districts of Berat and Vlorë.[4] It stretches 65 km north-south and 50 km east-west, with a total area of around 1350 square kilometers.[5]

The name of the region comes from the Medieval times, it is named after the ruling family of Muzaka (1280 - 1600) which possessed the area from Epirus. The toponym is first recorded as Musachia in 1417.[5] Previously the region's name was Savra.[6]
Another version of the etymology comes from the folkloric traditions, under which, the name comes from an old clan chief called Lal Muzhaqi who settled the area.[6] 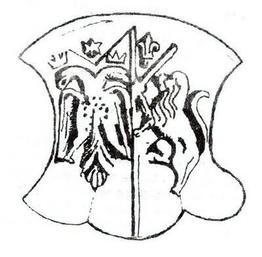 The Royal Coat-Of-Arms of the House of Musachia
According to John Musachia (Muzaka) in his Chronicles, the Musachia were the Desponte of Epirus and their roots were deeply rooted in Albanian antiquity in the region of Epirus. Masachia alleges that according to family oral tradition, they hailed from the house of the Molossians. He also alleges that the name Musachia or Mossaichia was a Latin corruption of the name Molossia, which was the name of region in ancient Epirus. Musachia also presents forth as evidence the family coat-of-arms baring the symbol of the Fountain of Epirus which in the middle ages also added the double-headed eagle and the Lion of Macedonia. 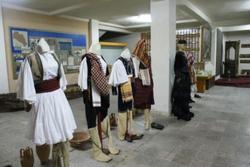 Museum in the city of Fier
Myzeqe is where the Gheg, Tosk, and Lab populations meet.[3] There is also presence of Vlachs, established mainly in Divjake town, and some of the Fier villages. Plenty of Slavic toponyms are present in Myzeqe.[7] Aside from the Vlachs, and some Roma, practically all the inhabitants of Myzeqe are ethnic Albanians. All people from the region as called Myzeqarë ("People from Myzeqe") which is widely used on a geographical point of view. Another term used is Lal(ë), deferring them from other groups, i.e. the Labs.[6]
Myzeqe is notable in its religious makeup as one of the few fairly large regions of Albania where a majority of inhabitants remained Orthodox Christian throughout the Ottoman rule. Around the era of Albanian independents, statistics show that around Fier, roughly 65% of population was Christian, while Lushnja the numbers of Christians and Muslims were comparable. [8]

This region is well known for its agricultural potential which was not always utilized. Most of today's fields were practically swamps and desolate lands until after World War II. This caused seasonal migration of the population.[9][10] After WWII, the communist government launched massive campaigns for draining the area. Following the increase in agricultural potential, the region gained significant importance. Since then, Myzeqe has been called the "Albanian granary".