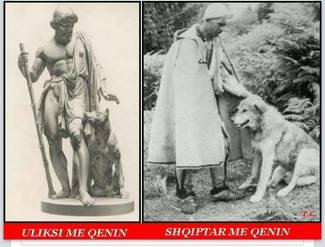 (left) Odysseus with dog, (right) Albanian shepherd with dog
This ancient[1] dog breed of dog is commonly considered to be the ancestor (in rivalry with the Alaunt, the dog of the Alans) of today's Mastiff[2]-type dogs and of many other modern breeds. Mastiff-type dogs are often referred to as Molossus dogs or Molossers. It is one of the best-known breeds of Greco-Roman antiquity; however, its physical characteristics and function are debated. Though the Molossus breed no longer exists in its original form, this large ancient breed was, along with the Tibetan Mastiff, an important ancestor of modern breeds such as the English Mastiff, St. Bernard, Great Pyrenees, Rottweiler, Great Dane, Newfoundland, Greater Swiss Mountain Dog, and Bernese Mountain Dog. 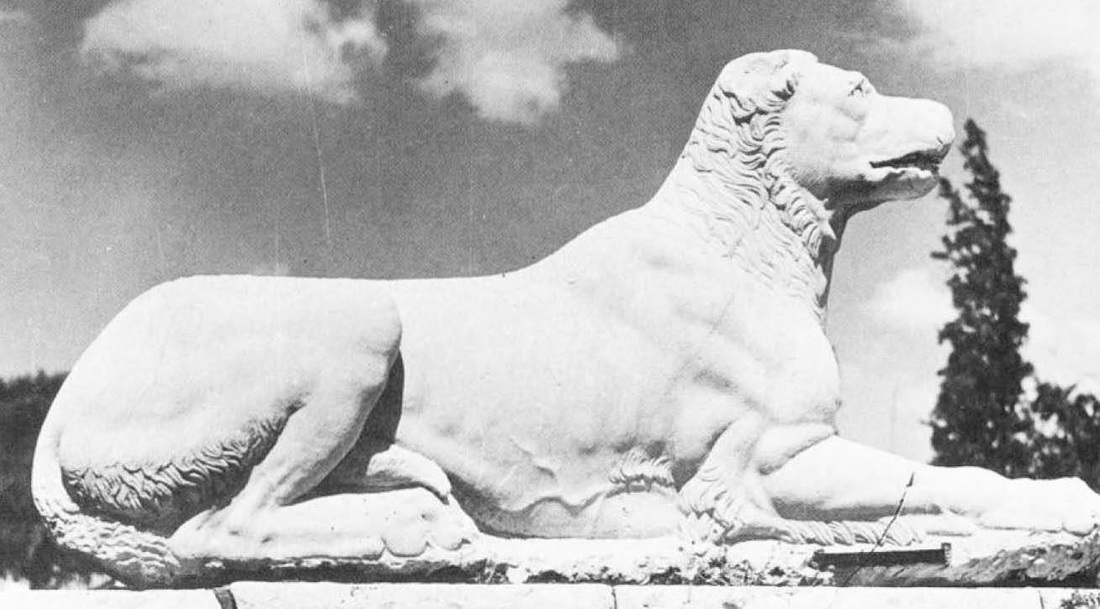 Most scholars agree that the Molossus originated with the Molossis people in the mountainous regions of north west Ancient Greece and southern Albania. The Molossians were renowned for their vicious hounds, which were used by Molossian shepherds of Epirus[5] in the mountains of northwestern Greece to guard their flocks. The poet Grattius, a contemporary of Ovid, writes "...when serious work has come, when bravery must be shown, and the impetuous War-god calls in the utmost hazard, then you could not but admire the renowned Molossians so much."[6] 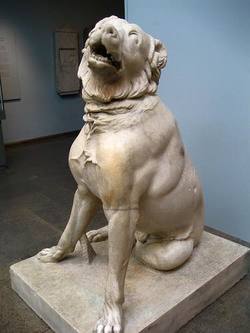 Some scholars contend that the Molossus was a dog used by the Ancient Illyria [3] also for fighting.[4] They describe it as having a wide, short muzzle and a heavy dewlap (similar to modern Mastiff breeds) that was used to fight tigers, lions, elephants, and men in battle. A Roman copy of a Greek original sculpture of a guard dog (known as the Jennings Dog) is generally considered to represent a Molossus and can be seen at the British Museum.
​
Others argue that it was primarily a lightweight dog used for hunting and herding with physical characteristics more akin to Greyhounds or possibly the American Pit Bull Terrier. 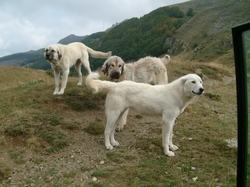 The first thing to notice on an Molossian is the large head. It is approximately 40% of body height. The height of the dog is about 60-65 cm (2 feet - 2.2 feet), while the length of 110-120 cm (3 3/4 feet - 4 feet). Chest circumference ranges from 85 cm to 95 cm, and width at shoulder 30-35 cm. Body weight around 40-50 kg (99.2 lb - 110 lbs), but even more. So it turns out that he has a massive and powerful body, associated with a large head - Well, this is precisely the characteristic feature of this breed dog. As regards the form of the skull of the head of dogs, there are three basic forms: dolikocefale (eg Saluki breed originating from the Middle East), mezocefale (eg hunting breed originating Pointer English) and brakicefale (p .sh. Boxeri German). Form the head being average mezocefale Mollos is neither long nor narrow, nor short or wide, but powerful. Ballin has wide and slightly round. But in terms of the type of head, it is lupoido - mollosoide. We note that the term "mollosoid" is borrowed from the name exactly such dogs who wore Mollosëve Illyrian tribes in antiquity and used today Cynology science, to show dogs with big body and very strong.

Uses for the dog 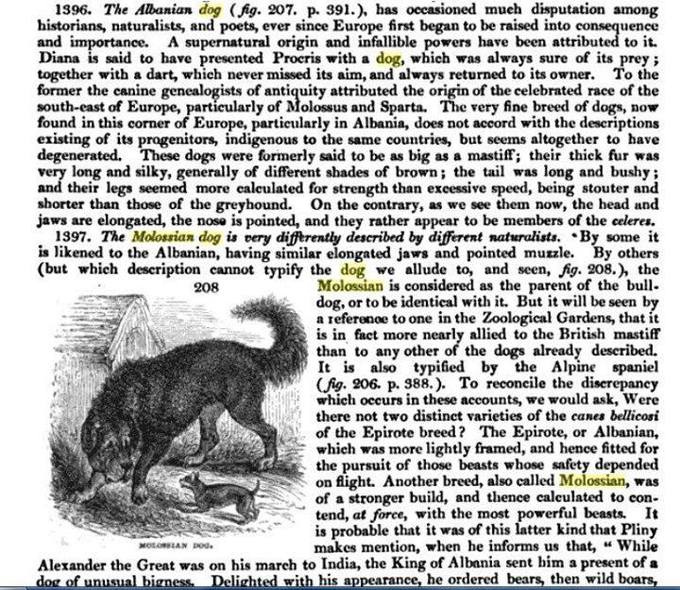