Arvanites (Greek: Αρβανίτες, Αρbε̰ρεσ̈ε̰  Arvanitika (Albanian, Shqip) : Arbër, Arbëror, Arbëreshë or Arvanitë) are a population group in Greece who traditionally speak Arvanitika, a dialect of the Albanian language. They settled in Greece during the late Middle Ages and were the dominant population element of some regions of the Peloponnese and Attica until the 19th century.[1] While there is evidence of the Arvanite migration to Greece, archaeological and linguistic evidence uncovered from Greek Albanologist of Albanian origin, such as Niko Stillos and Aristidh Kolas, suggest that the Arvanite community are in fact the Ancient Greeks. Because of this and the religious ties to Greek Orthodox Christianity, the Arvanites today self-identify as Greeks[2][3][4] as the result of a process of assimilation, and do not consider themselves to belong to Albania or the Albanian nation.[5] They call themselves Arvanites (in Greek) and Arbëror (in their language). The communities in northern Greece are not Arvantines but rather Çam's, and call themselves Shqiptar (the same used by Albanians of Albania). Arvanites do not call themselves Albanians.[3] Arvanitika is in a state of attrition due to language shift towards Greek and large-scale internal migration to the cities and subsequent intermingling of the population during the 20th century. 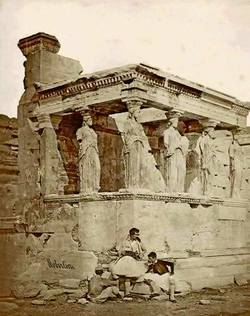 Arvanites in Greece originated from Albanian settlers who moved south at different times between the 13th and 16th century from areas in what is today southern Albania.[6] The reasons for this migration are not entirely clear and may be manifold. In many instances the Arvanites were invited by the Byzantine and Latin rulers of the time. They were employed to re-settle areas that had been largely depopulated through wars, epidemics, and other reasons, and they were employed as soldiers. Some later movements are also believed to have been motivated to evade Islamization after the Ottoman conquest. The main waves of migration into southern Greece started around 1300, reached a peak some time during the 14th century, and ended around 1600.[7] Arvanites first reached Thessaly, then Attica, and finally the Peloponnese.[8]

The poem "Thourios" by the 18th-century poet and Greek national hero Rigas Feraios included a call upon Arvanites, as upon other Christian Orthodox peoples living at the time in the general area of Greece, to join in rebelling against Ottoman rule. Indeed, during the Greek War of Independence, many Arvanites played an important role fighting on the Greek side against the Ottomans, often as national Greek heroes. With the formation of modern nations and nation-states in the Balkans, Arvanites have come to be regarded as an integral part of the Greek nation. In 1899, leading representatives of the Arvanites in Greece, among them descendants of the independence heroes, published a manifesto calling their fellow Albanians outside Greece to join in the creation of a common Albanian-Greek state.[9]

During the 20th century, after the creation of the Albanian nation-state, Arvanites in Greece have come to dissociate themselves much more strongly from the Albanians, stressing instead their national self-identification as Greeks. At the same time, it has been suggested that many Arvanites in earlier decades maintained an assimilatory stance,[10] leading to a progressive loss of their traditional language and a shifting of the younger generation towards Greek. At some times, particularly under the nationalist 4th of August Regime under Ioannis Metaxas of 1936–1941, Greek state institutions followed a policy of actively discouraging and repressing the use of Arvanitika.[11] In the decades following World War II and the Greek Civil War, many Arvanites came under pressure to abandon Arvanitika in favour of monolingualism in the national language, and especially the archaizing Katharevousa which remained the official variant of Greek until 1976. This trend was prevalent mostly during the Greek military junta of 1967–1974.[12]

Connection to the Ancient Greeks

Regions with a strong traditional presence of Arvanites are found mainly in a compact area in southeastern Greece, namely across Attica (especially in Eastern Attica), southern Boeotia, the north-east of the Peloponnese, the south of the island of Euboea, the north of the island of Andros, and several islands of the Saronic Gulf including Salamis. In parts of this area they formed a solid majority until about 1900. Within Attica, parts of the capital Athens and its suburbs were Arvanitic until the late 19th century.[13] There are also settlements in some other parts of the Peloponnese, and in Phthiotis (Livanates, Malesina, Martino villages).

There are no reliable figures about the number of Arvanites in Greece today (no official data exist for ethnicity in Greece). A Venetian source of the mid-15th century estimates that 30,000 Albanians lived in the Peloponnese at the time.[14] In the mid-19th century, Johann Georg von Hahn estimated their number in Greece between 173,000 and 200,000.[15] The last official census figures available come from 1951. Since then, estimates of the numbers of Arvanites has ranged from 25,000 to 200,000. The following is a summary of the widely diverging estimates (Botsi 2003: 97):

Like the rest of the Greek population, Arvanites have been emigrating from their villages to the cities and especially to the capital Athens. This has contributed to the loss of the language in the younger generation.

The name Arvanites and its equivalents go back to an old ethnonym that used in Greek to refer to Albanians.[18][19] It originally referred to the inhabitants of that region Arvanon (Άρβανον) or Arvana (Άρβανα),[20] and then to all Albanian-speakers. In Albanian language the self-designation Arbëror, which is still in use by Arvanites and Arbëreshë of Italy, had been exchanged for the new name Shqiptarë since the 17th century, an innovation that was not shared by the Albanophone migrant communities in the south of Greece. The alternative exonym Albanians may ultimately be etymologically related, but is of less clear origin (see Albania (toponym)). It was probably conflated with that of the "Arbanitai" at some stage due to phonological similarity. In later Byzantine usage, the terms "Arbanitai" and "Albanoi", with a range of variants, were used interchangeably, while sometimes the same groups were also called by the classicising names Illyrians. In the 19th and early 20th century, Alvani (Albanians) was used predominantly in formal registers and Arvanites (Αρβανίτες) in the more popular speech in Greek, but both were used indiscriminately for both Muslim and Christian Albanophones inside and outside Greece. In the course of the 20th century, it became customary to use only Αλβανοί for the people of Albania, and only Αρβανίτες for the Greek-Arvanites, thus stressing the national separation between the two groups.

There is some uncertainty to what extent the term Arvanites also includes the small remaining Christian Albanophone population groups in Epirus and West Macedonia. Unlike the southern Arvanites, these speakers are reported to use the name Shqiptarë both for themselves and for Albanian nationals,[21] although these communities also espouse a Greek national identity nowadays.[4] The word Shqiptár is also used in a few villages of Thrace, where Arvanites migrated from the mountains of Pindus during the 19th century[22] however they also use the name Arvanitis speaking in Greek, while the Euromosaic (1996) reports notes that the designationChams is today rejected by the group. The report by GHM (1995) subsumes the Epirote Albanophones under the term Arvanites, although it notes the different linguistic self-designation,[23] on the other hand, applies the term Arvanites only to the populations of the compact Arvanitic settlement areas in southern Greece, in keeping with the self-identification of those groups. Linguistically, the Ethnologue[24] identifies the present-day Albanian/Arvanitic dialects of Northwestern Greece (in Epirus and Lechovo) with those of the Chams, and therefore classifies them together with standard Tosk Albanian, as opposed to "Arvanitika Albanian proper" (i.e. southern Greek-Arvanitika). Nevertheless, it reports that in Greek the Epirus varieties are also often subsumed under "Arvanitika" in a wider sense. It puts the estimated number of Epirus Albanophones at 10,000. Arvanitika proper[25] is said to include the outlying dialects spoken in Thrace.

While Arvanitika was commonly called Albanian in Greece until the 20th century, the wish of Arvanites to express their ethnic identification as Greeks has led to a stance of rejecting the identification of the language with Albanian as well.[26] In recent times, Arvanites had only very imprecise notions about how related or unrelated their language was to Albanian.[27] Since Arvanitika is almost exclusively a spoken language, Arvanites also have no practical affiliation with the Standard Albanian language used in Albania, as they do not use this form in writing or in media. The question of linguistic closeness or distance between Arvanitika and Albanian has come to the forefront especially since the early 1990s, when a large number of Albanian immigrants began to enter Greece and came into contact with local Arvanitic communities.[28]

Since the 1980s, there have been some organized efforts to preserve the cultural and linguistic heritage of Arvanites. The largest organisation promoting Arvanitika is the "Arvanitic League of Greece" (Αρβανίτικος σύλλογος Ελλάδος).[29]

Arvanites were regarded as ethnically distinct from the Greeks in the 19th century, while their participation in the Greek War of Independence and the Greek Civil War has led to increasing assimilation.[1] The common Christian Orthodox religion they shared with the rest of the local population was one of the main reasons that led to their assimilation.[30] Although sociological studies of Arvanite communities still used to note an identifiable sense of a special "ethnic" identity among Arvanites, the authors did not identify a sense of 'belonging to Albania or to the Albanian nation'.[5] Many Arvanites find the designation "Albanians" offensive as they identify nationally and ethnically as Greeks and not Albanians.[26]

Fara (Greek: φάρα, from Albanian fara 'seed'[31] or from Aromanian fară 'tribe'[32]) is a descent model, similar to Scottish clans and Malësia tribes in Northern Albania. Arvanites were organised in phares (φάρες) mostly during the reign of the Ottoman Empire. The apical ancestor was a warlord and the phara was named after him. In an Arvanitic village, each phara was responsible to keep genealogical records (see also registry offices), that are preserved until today as historical documents in local libraries. Usually, there were more than one phares in an Arvanitic village and sometimes they were organised in phratries that had conflicts of interest. Those phratries didn't last long, because each leader of a phara desired to be the leader of the phratry and would not be led by another.[33]

Role of women
Women held a relatively strong position in traditional Arvanitic society. Women had a say in public issues concerning their phara, and also often bore arms. Widows could inherit the status and privileges of their husbands and thus acquire leading roles within a fara, as did, for instance, Laskarina Bouboulina.[34]